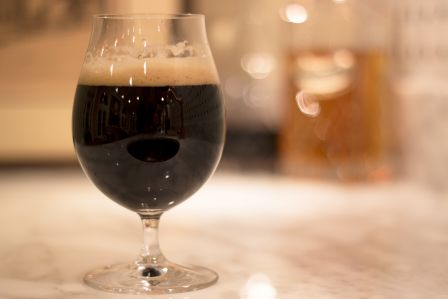 This week I though I would share a case study in beer recipe design to explore how I approach beer recipe design and some of the critical decisions made along the way. I will be designing a robust porter, which is one of my favorite beer styles.

Before I start on a new beer, I try to sit down and describe what I’m trying to accomplish. In this case I’m looking for a moderately alcoholic porter that is robust in flavor and has some complexity and depth to the grain bill. I want to create a porter that is complex but still drinkable, and reflects the fresh roast grains used. Bitterness levels will be moderate. I’m not creating a pure English porter, but I do want the beer to reflect the complexity of English ales rather than the clean finish of many American styles.

The Malt Bill for a Porter

One of the first things I look at when approaching a new beer is whether it is a malt forward or hop forward beer. This drives the malt bill, hops picked and various brewing techniques used. In this case, the porter I want to brew is clearly malt-forward as its flavor is driven primarily by the malt bill and not hops.

The next item to consider is what drives the malt bill for the beer? For the robust porter I have in mind, the dark specialty malts are top in my mind. Also I want to create a beer that has depth of flavor where there are multiple competing dark malts providing a layered finish. I personally don’t like single-dark malt beers as I think they lack proper depth and are boring.

As a base malt I choose Maris Otter, mainly because it reflects the grain complexity I’m looking for in the finished beer. Maris Otter is a flavorful English pale malt and I think it fits well with the style. I used Maris Otter as the base (87% of the grain bill).

To achieve proper depth of flavor in a robust porter, I personally like to pick grains from different malt groups. From the roasted group I picked a blend of 2% Black patent and 3.6% Chocolate malt. Next I purposely picked two Crystal malts that are in the harsh zone: Special B (3.6%) and Crystal 60L (3.6%). If you have not read my article on harsh zone malts, these are malts that have harsh flavors like burnt marshmallow and burnt toast if you overuse them. However, in small quantities, malts like Special B can add some great complexity, dark fruit flavors and depth to your beer.

Notice that the entire mix of specialty malts only makes up 12.9% of the malt bill, and the harsh malts make up only a few percent. This fits with my philosophy that most of your malt bill should be base malt. Despite this, the finished beer has a very robust porter flavor, bordering on some milder stouts in terms of flavor.

For original gravity I picked a somewhat modest OG of 1.059, which due to the lower attenuation English Ale yeast used gives only a 5.3% beer. This keeps it drinkable but still retains plenty of body.

For hops, I did go with a slightly unconventional choice. Normally I probably would have used a traditional English hops like East Kent Goldings. However I enjoy well balanced beers from the midwest like Edmunds Fitzgerald Porter and Bells Two Hearted so I decided to use Centennial as my hop. I have had good results with this hops in other beers, and since this was not a hop forward beer I thought it a good opportunity to experiment.

I picked a hop level of 36.7 IBUs for a bitterness ratio of 0.674 which is in the “balanced” range for hop to malt. This is not a hop forward beer, but you still need sufficient hops to offset the high body of the finished beer.

For yeast, I went with a traditional English Ale yeast (WLP002 from White Labs). I could easily have gone with an American Ale yeast if I wanted a cleaner finish, but like the pick of Maris Otter above I thought the English Ale would add complexity (esters, diacetyl, etc..) and depth to the finished beer. Also I was shooting for a higher final gravity (low attenuation) to increase body.

Water and the Mash

I did not do much in terms of water adjustment for this beer – targeting a balanced water profile that had mid-range numbers for all of the major water ions. Since my base water has low ions I did have to add a few water salts but this was done just to bring the ions up to an appropriate level for brewing.

I picked a medium body single step mash profile, and targeted a mash pH of 5.2. This did require a small lactic acid addition up front to achieve my target mash pH but I did not require any additional acid after that.

As I had access to a temperature controlled fermenter, I targeted the mid temperature range for the yeast which was around 67 F. Fermentation progressed rather quickly and I removed the trub from the bottom of my conical as it built up. I fermented and aged the beer for approximately a month total before transferring to kegs.

I sampled the beer at kegging and it was quite good. After about a week to carbonate, I sampled again and it became even better. Early on it had a very robust but remarkably fresh taste. The flavor and complexity was exactly what I was looking for in the beer. I was particularly happy with how the grain bill came through and created the layers of distinct flavors I was looking for. It was not a one-dimensional malt flavor but instead a cacophony of roast maltiness. It was a great fresh beer, so I put it in the fridge and enjoyed it for several months.

After aging for perhaps a month more it did change character slightly – achieving a more mild balanced flavor that was very enjoyable, though it did loose some of the super fresh character it had up front.

Thanks for joining me on the BeerSmith Home Brewing Blog. Be sure to sign up for my newsletter or my podcast (also on itunes…and youtube) for more great tips on homebrewing. 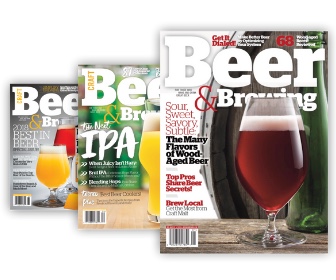