Good To Know
The first week of October, DC posted a notice on our front door informing us that an arborist deemed the oak tree in our front yard hazardous. Up until that moment, it would have been illegal to cut down as a "heritage" tree (over 100" in circumference). They gave us 10 days to apply for a permit and have it removed. The tree had obviously been on the down-slope for the last 10 years, but this summer a large swath had gone brown mid-August and the rest in late-September.

I was sad to see the tree go, but glad I got to brew a beer with acorns foraged from it before it went! 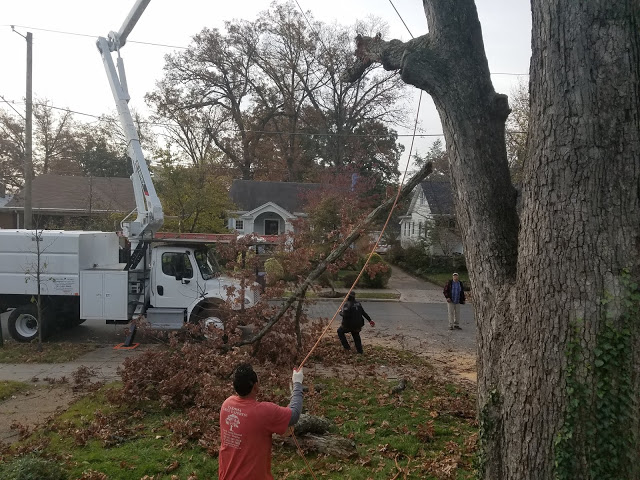 Last fall, inspired as usual by The Homebrewer's Almanac, I collected acorns over a few afternoons. While fresh acorns are loaded with tannins, fermented they are said to take on a wonderful aromatics reminiscent of bourbon, Madeira, and plums. The various parts of any plant usually contain shared compounds (and flavors). It has become fashionable to cook with the "garbage" parts of plants (and animals) usually thrown away. While it takes more effort to prepare collard green stems or pork feet, it can be well worth it. While oak wood is used to age thousands of beers, its acorns, leaves, and bark are not nearly as popular.

I inspected each acorn to remove any that were cracked, or otherwise marred. I briefly rinsed them, and then arranged in a single layer on a shallow baking dish in the basement to allow them to dry. 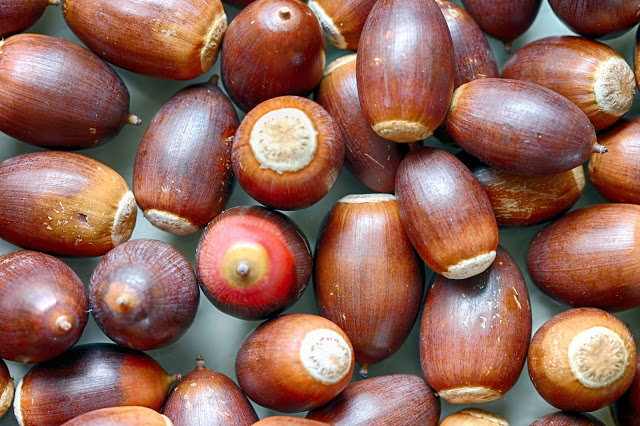 Apparently my inspection wasn't thorough enough as I missed several small blemishes (example below) that indicated an acorn weevil had laid an egg inside. 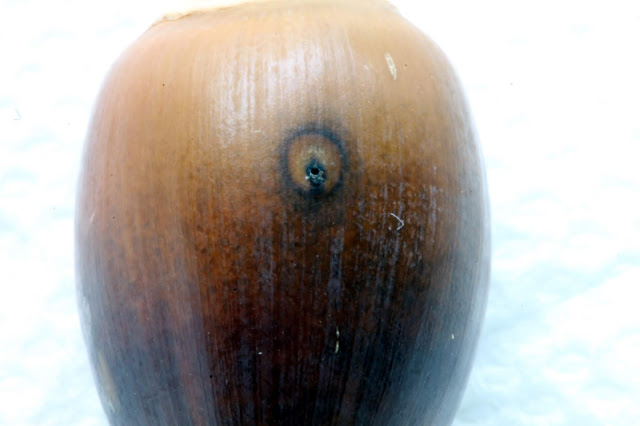 A week later, after discarding those where a larva bored out, I moved the acorns to five lightly sealed pint mason jars. I didn't add water, microbes, or anything else. 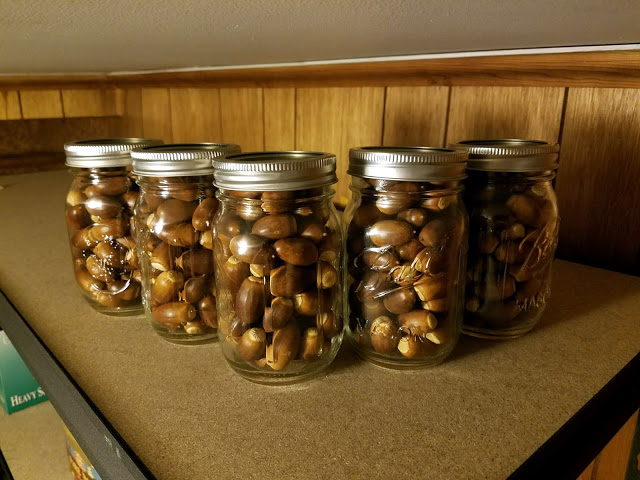 Over the next nine months in my 65F basement the acorns slowly fermented on their own. First producing carbon dioxide and the pleasant aroma of ethanol. Then slowly a more complex aromatics of apricot, chocolate, and bourbon. Exactly which microbes are responsible is a mystery to me.

When I visited Scratch Brewing last November (on my drive from St. Louis to Indianapolis for the BYO Boot Camp... next one is March in Asheville) I had the chance to assist Marika on a batch at Scratch, and see their jars of fermenting acorns. Luckily for them, Aaron told me weevils haven't been an issue! 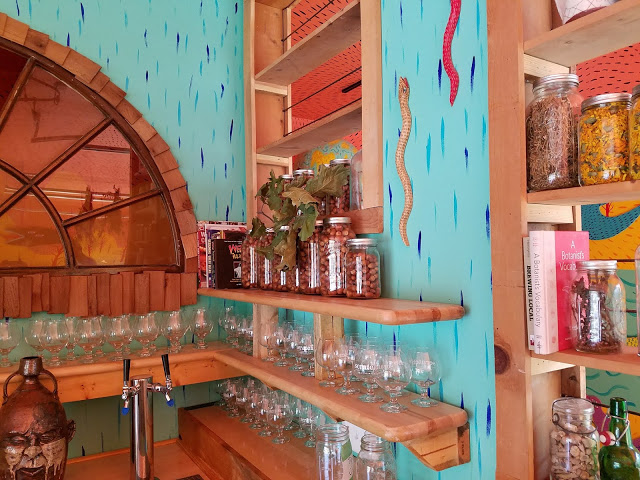 By the following summer, my acorns were smelling like a combination of whiskey distillery, apricot orchard, and old library. While their exteriors were unchanged, the interior transformed from beige to leathery brown. Non-enzymatic browning, that is to say the Maillard reaction may be at work as with black garlic? While these processes are accelerated at high temperature, they still happen when cooler.

I thought an oud bruin-ish base would provide a solid foundation for those darker flavors. I added flaked rye for body and fermented with East Coast Yeast Oud Brune (which contains no Brett, only Sacch and Lacto). ECY Flemish Ale is still hard at work on the other half of the batch. Once the Oud Bruin was finished, I added a tube screen with one cup of the cracked (with a hammer) acorns. After a few weeks I added another cup to increase the flavor contribution. 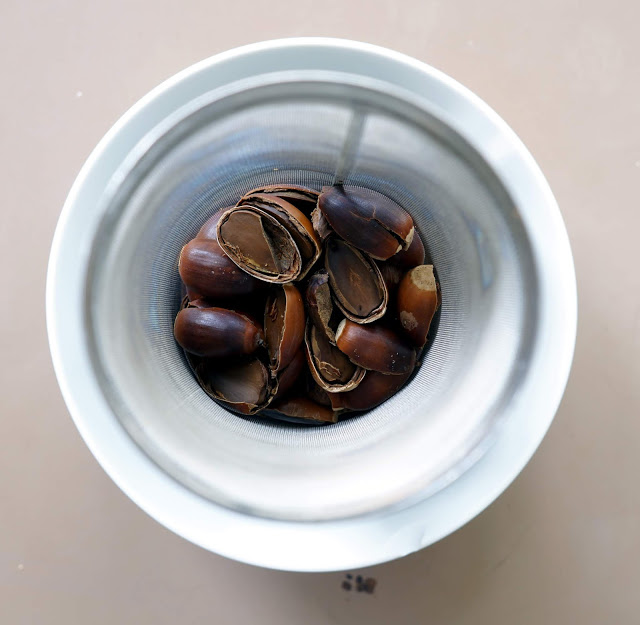 I'm hoping to use the remaining fermented acorns in a small batch at Sapwood Cellars, but the TTB isn't going along with my plans... yet. They've directed me to contact the FDA. It's amazing how many weird chemicals are approved, when a food that people have eaten for thousands of years is not.

Requiem for an Oak

Smell – Even at the higher rate the acorn character doesn’t leap out of the glass. It does have a richer, more woody-fruity aroma than any other quick sour I’ve brewed. I get some of that old book smell mingling with the Munich maltiness. There is also a brighter stonefruit aroma that prevents it from being too heavy.

Appearance – Pretty amber-brown color. Mild haze. Retention of the tan head is OK especially for a sour beer, although nothing remarkable.

Taste – Firm lactic acid, snappy without being overwhelming. The fermented acorns add leathery and fruity depth to the flavor without stepping all over the malt. I’m pretty happy with this as a lower alcohol oud bruin.

Drinkability & Notes – For such a unique beer, it is pleasant to drink. The flavors meld nicely and the acorns help to simulate in a way the effect of barrel aging and Brettanomyces.

Changes for Next Time – I’d probably go even more aggressive with the acorn-rate, really to show them off. The beer could be bigger, but more malt might obscure the acorns even more. 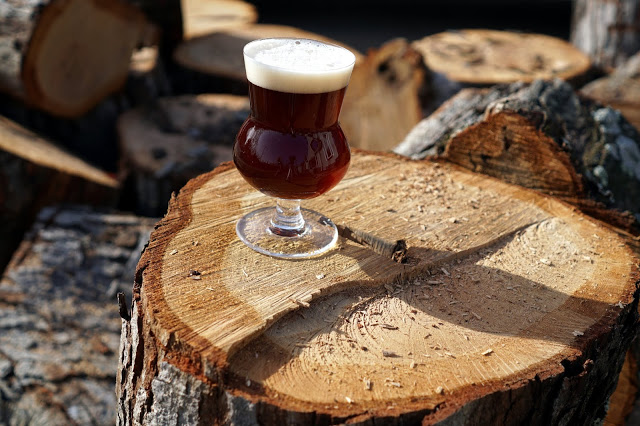 10/6/17 4 larvae of an acorn weevil hatched. Tossed any acorns with exit holes, and tried to identify all of those with small entry holes to toss. Moved remaining acorns to one-pint mason jars, attached lids, and returned to the barrel room for fermentation.

8/28/18 Racked Flemish half to secondary in glass.

I get a commission if you buy something after clicking the links to MoreBeer/Amazon/Adventures in Homebrewing/Great Fermentations/Love2Brew!