Good To Know
There are so many reviews of homebrewing gear online, but when it comes to craft brewing equipment you're lucky if you can find a forum post or two. It makes sense as there are so many more homebrewers than craft brewers... I also had more time to write before I started making beer 60+ hours a week. Now that we're a year into brewing at Sapwood Cellars, it seemed like a good time to step back and get my thoughts down about the equipment we purchased. Hopefully what follows will help a brewer starting out, looking to add something, or just wanting a sense of what things cost.

The Bad: A few design head-scratchers on the mash tun. It has a huge volume below the false bottom (~90 gallons/3 bbl). The under-screen spray balls spray directly into the supports making them useless (the connection for them is also around back making it difficult to access). The torsion ring on the rakes wasn't adequately tightened when we received it causing the rakes fell off mid-mash a few batches in. No issues since properly tightening. Originally the pickup arm in the kettle extended into the center (right into the trub cone), but they swapped us our for a shorter one that is now standard.

Verdict: Satisfied with it so far, but not thrilled given things like having to pull the false bottom to clean underneath/between after the last brew of the week (the plates can be annoying to remove, but not bad compared to some other systems). 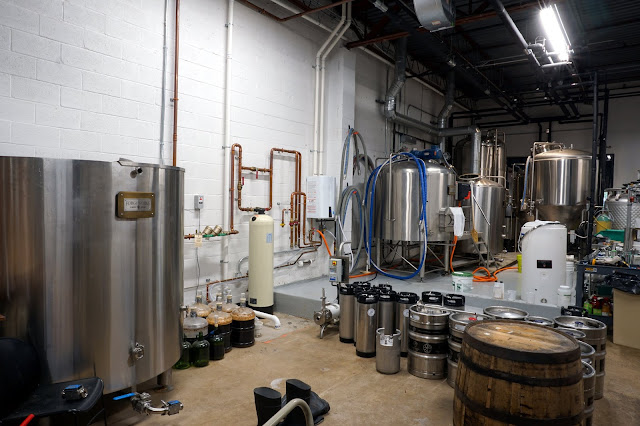 The Good: Plenty of heat to have the kettle close to a boil by the time run-off is finished.

The Bad: The burner's control board is incredibly sensitive to moisture, just a few drops and it is fried. A fact that it would have been nice to have a warning about from Forgeworks (they said some breweries have had it happen multiple times). Otherwise it has just been a learning curve to wait longer to turn it on and throttle the gas to avoid boil-overs. Our beers are 1-2 SRM darker than predicted thanks to direct fire, but not really the burner's fault.

Verdict: Steam would have been great, but wasn't in our budget. We haven't had issues since covering the control board with a plastic baggie (we've got a spare controller too). We were told that MidCo had a waterproof housing almost complete last fall, but haven't heard an update since. 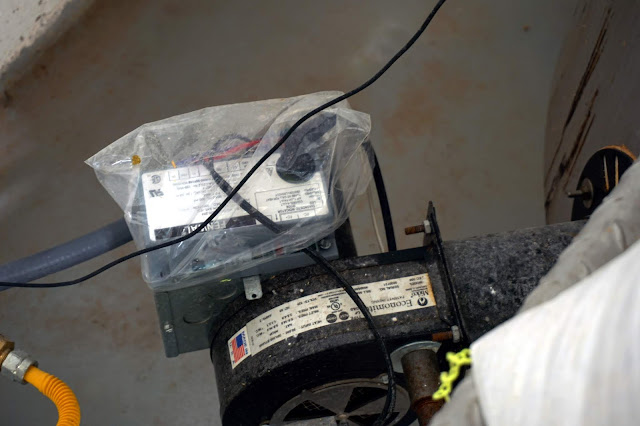 The Good: Their website allow you to input the parameters (volume, desired chilling rate, ground water/glycol temperature) and they build a unit to accommodate. That seemed to work for us as the chill times seem to line up reasonably.

The Bad: Nothing major to complain about. In the summer we do have to slow run-off as the second stage (glycol) doesn't lower the temperature compared to ground water by more than a degree or two at full blast.

Verdict: Might have been worth it to go a bit more over-sized, but no issues with the build-quality, durability etc. 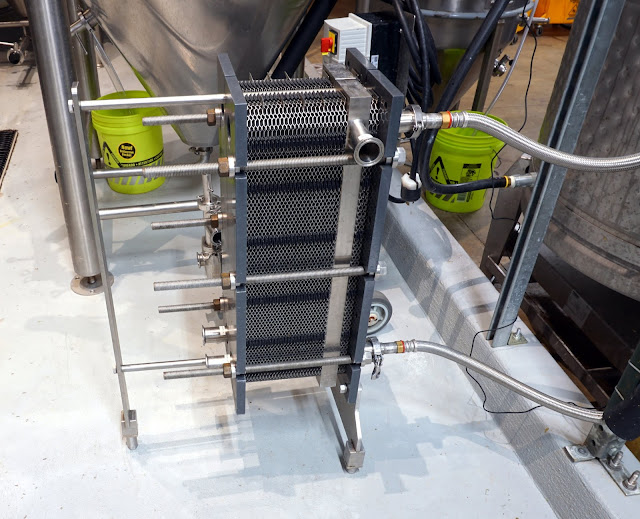 The Good: The price is reasonable. We've got the "new style" 10 bbls that have an easy-rotate racking. The 2 inch dumps at the bottom rarely get clogged with hops, and the 4 inch dry hop ports work well, especially with our hop doser (below).

The Bad: The 20 bbl tank is the "old style" meaning the racking arm is just a tri-clamp. Not ideal, but it works fine especially after switching to a Teflon gasket. The big issue on that tank is with the hop port, the literature said it was a 6 inch, but it turned out to be a DIN150 (European fitting). Apex had been aware of this for 6 months and it took me ordering a gasket (to confirm the size), a custom reducer, and a new clamp all from Sanitary Fittings to resolve the issue.

There is a minor issue with one of the 10 bbl fermenters as well, the sparyball arm is just a little short which makes reassembly a two person operation (one to push, one to clamp).

Verdict: Given the issues and poor service with the 20 bbl, I'm hesitant to order more tanks from them when the time for expansion comes. Especially as they don't manufacture the tanks, the only advantage of going with them rather than directly from a Chinese manufacturer would be service. 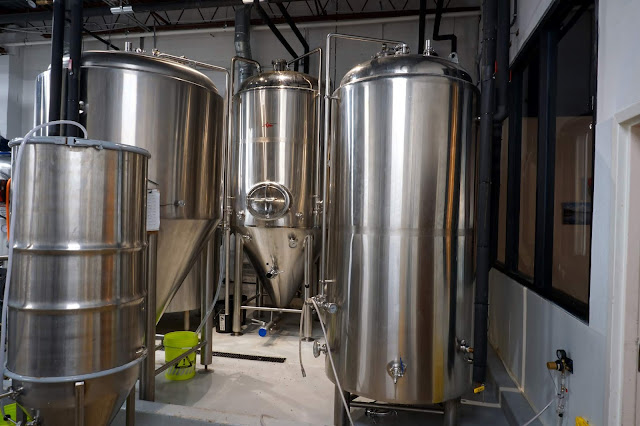 The Good: Great price for an semi-automated keg washer. It rinses, washes, sanitizes, and purges two kegs at a time without intervention. As long as everything is connected and the reservoirs are filled, we rarely have an issue (other than hops in the occasional keg plugging up). The cycles are customizable, so we've tweaked them. We run a double cycle on our sour kegs, and no issues so far sharing them with clean beers.

The Bad: It's been a bit of a chore to deal with the issues that have arisen in one year of use: casters fell off, weld on one of the pots failed, software "disappeared", gas solenoid failed etc.

Verdict: The company has been great at dealing with these issues as they've occurred, shipping us replacement parts, paying for a welder etc. That said, I'd rather have not spent so much time dealing with it. 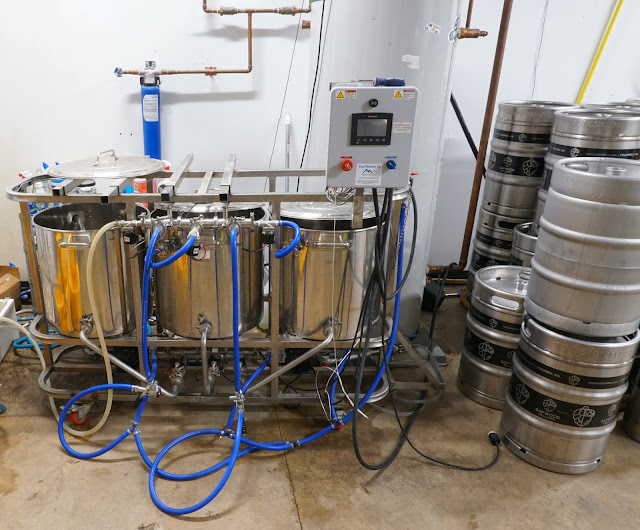 The Good: Allows us to add hops with minimal oxygen pick-up. Safer than dry hopping loose (no risk of foam-up). Ability to add hops to a tank without venting the head pressure.

The Bad: Nothing big, although expect to double the cost of the unit itself in fittings. We have 4 inch butterfly valves on our tanks and move the doser between them as needed.

Verdict: Not sure what we'd do without it... oh I do because we we're able to use it on our 20 bbl because of the wonky port size (run CO2 and hope you don't get a face full of beer). 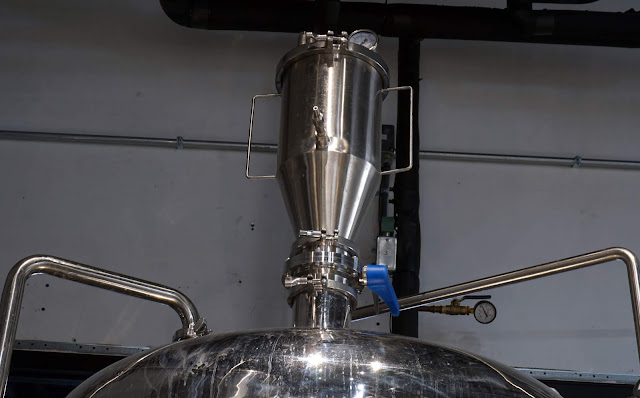 The Good: Outputs up to 180F, plenty hot for collecting water for the mash and sparge or pasteurizing a line. Relatively inexpensive to buy and operate compared to a traditional always-on HLT.

The Bad: In the winter 180F output runs at 3 gallons/min. Helps to have a tank with an electric element to speed things up, or pre-collect water the night before.

Verdict: At our scale, and without steam this made the most sense and we're still happy with it. Two units can be daisy-chained together if we want to speed things up (e.g., first heats to 140F, second to 180F). 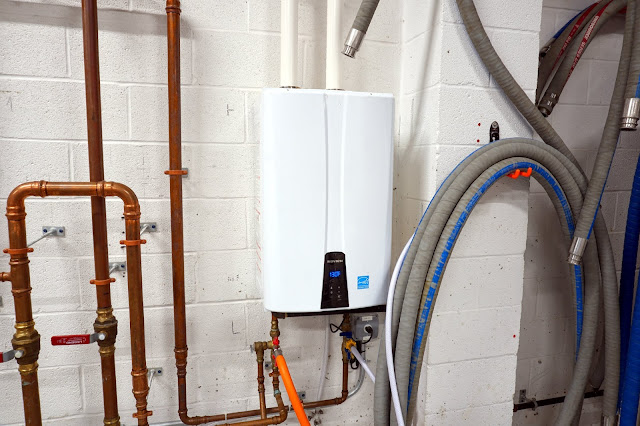 The Good: It's considerably less expensive than even a used propane-powered forklift. It's good in tight spaces because it's human powered, and powerful enough to lift a rack with two barrels. Being electric, it doesn't produce fumes that could negatively effect barrel-aging beers.

The Bad: Given the legs in front, it can't get around larger pallets, or standard pallets the long way.  It is propelled by pushing, and weights over 1,200 lbs (plus whatever you are moving up to 2,200 lbs more). Only one wheel turns with steering making direction changes difficult. It also needs additional height above it, which can be tricky in a building with HVAC, lights, doorways etc.

Verdict: With our relatively cramped space, a forklift doesn't make sense, this gets the job done. 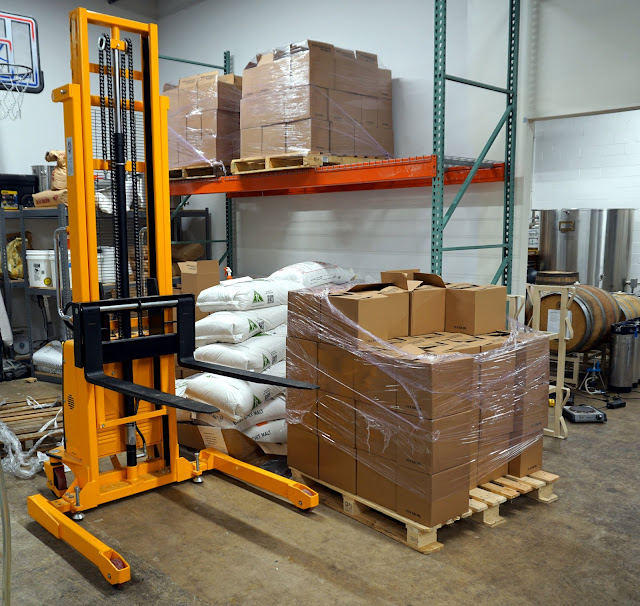 The Good: They are inexpensive compared to stainless steel totes, while being easier to use than IBCs (international bulk containers). They have standard 1.5" tri-clamp fittings and sample ports. We mainly use the 300 gallon ones to hold bulk sour beer waiting for barrels, or to dilute barrel-aged beer that is too oaky (especially with so many first-use barrels). The 80 gallon FlexTanks are for fruit additions, where the large opening makes them easier to fill and empty than a barrel.

The Bad: They can only take ~1 PSI, so most of the movement has to be from gravity. The gasket on the lids is round and doesn't have a grove to sit in. This makes it is difficult to align without dropping in.

Verdict: They were a good place to start thanks to the price, but stainless would be more versatile and foolproof if you have the money. 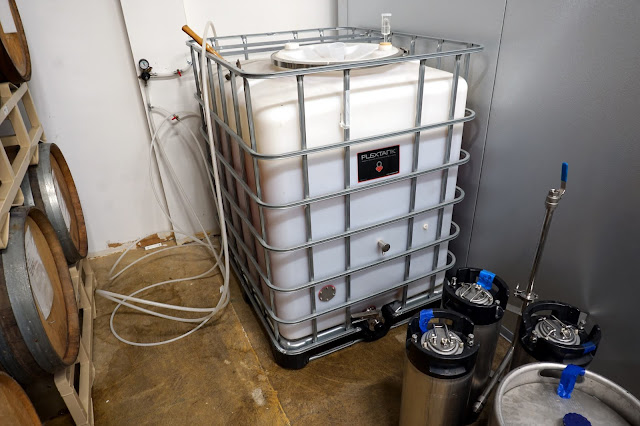 The Good: It's a movable, stainless-steel, temperature-controlled tank. We use it as our blending tank for sour barrel-aged beers. The bottom port is for liquid in/out (with a T for the sample port), and the two side ports for the temperature probe and carbonation stone. We currently have it off the pad, so it is nice to be able to pallet-jack it onto the pad for cleaning.

The Bad: It's odd that a jacketed tank doesn't have a built-in thermowell for the temperature probe. We use corny fittings for some kegs anyway, but it is weird to have a tank like this with a gas poppet on top. While the tank is jacketed, it isn't double walled so it sweats like crazy in the summer, we need to insulate it.

Verdict: Reasonably happy with it, but it requires a bit of a unique situation (like ours) to justify this over a standard brite tank. 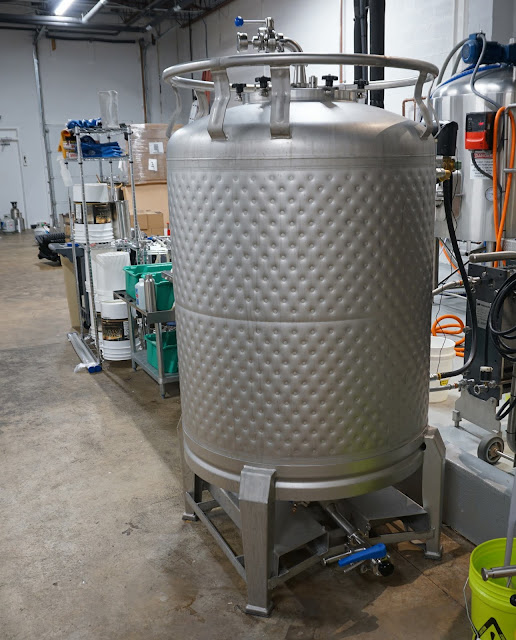 The Good: It's a reasonable price for a four-head counter-pressure bottle filler. Does four bottles a minute when everything is humming along.

The Bad: We had some issues early on with the fill sensor. One or two heads would indicate that the bottle was filled even when it was empty. Turned out it was a drop of condensation on the CO2 line "falsely" completing the circuit. Not a problem now that we know what to do. One of the switches won't stay in the off position, which can cause the pneumatic foot to rise unexpectedly.

Verdict: I'm happy with it. Worth the added cost over a gravity filler for us because it reduces oxygen exposure, and allows us to bottle partially (or fully) carbonated beer. Our general approach is to chill the beer in the blending tank, prime with sugar and rehydrated yeast, agitate the tank, then pump in CO2 through the stone to get to ~1.5 volumes of CO2. The yeast does its job to bring the carbonation to target in the bottle, and we don't have to worry about predicting residual CO2 in barrels stored in ambient conditions.

Update: We had to cut down the stoppers to lower the fill heights which were ~17.4 oz in our 16.9 oz bottles. That seemed to work well. 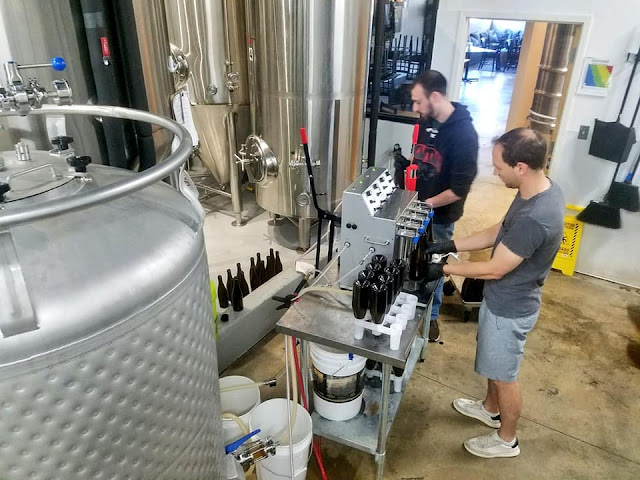